Montréal based duo, 99 Wolves, formed of ELMNT & Moses Belanger started the collective in Summer 2015. Known for their eclectic production & electric live performances, the duo has managed to garner positive results within their respective circles. 99 Wolves have the ability to DJ, produce & perform live, adapting to the projects requirements.

ELMNT came over to London and we met up at Kings Cross Station with my girl Sophie of Music In Motion PR.

Introductions were in order and ELMNT had a very interesting story!

Whilst here in London ELMNT was on a Press Tour with Benjamin AD & linked up with J Lucia from Brand New series of The Rap Game UK,  who is cousins with ELMNT’S best friend back in his home town.

Having previously produced for the Gorillaz, he has plans to reconnect behind the scenes with Remi Kabaka JR of the Gorillaz who speaks extremely high of ELMNT;

Before we got into our chat he pointed out I had a bit of glitter on my face and I can honestly say I do not know why these little bits of glitter keep finding their way onto me but it was the same glitter that I had pasted on for LoveBox and I swear I’ve washed since then LOL.

It was clear that ELMNT had a keen interest in British music as he was asking about J Hus and Stormzy – “Are my boy’s still doing their thing?” This took me by surprise as I wasn’t expecting to have such a cool laidback chat with him about music over here in the UK.

I filled him in on Hus’s recent release from prison and the few features he has done here and there since.

Referring to Stormzy as “The one with the deep voice” gave me a little insight to how Montréal looks at and listens to UK music. I told him about Stormzy’s most recent releases, “Sounds of the Skeng” and “Wiley Flow” and ELMNT wanted my opinion “Is it Dope?”… I told him yeah I really like “Wiley Flow” packed with bars and I feel like it’s a reminder that Grime beats bang and it highlights that, that is still a part of Stormzy as a person and pays homage to the Godfather. Soph was able to add to this telling ELMNT about Merky Books the publishing company which is an imprint within William Heinemann, dedicated to publishing the best new fiction, non-fiction and poetry. Curated by Stormzy, #Merky Books forms a home for a new generation of voices.

Time wasn’t on my side this day and I was actually really gutted because the conversation we were having was right up my street and genuinely interesting. With that being said ELMNT proceeded to tell me a bit about him and his upbringing saying;

“I was born in Bosnia,  I left as an immigrant of war in 1993. I was predominantly raised in Toronto for about 25 years and now I currently live in Montréal, Canada which is the french part of Canada.”

I thought to myself wow, I’ve never actually met someone that has been an immigrant of war, so I touched on that asking him “Was it a tough transition?”

“Yeah for sure, I think that its tough in different ways that you can probably put a scope on as a kid, coz like, it definitely left its remnants of fear and all kinds of messed upness afterwards, I saw how it affected my family and that made me like a really sheltered person for a long time, I was walking around with a chip on my shoulder for a while, I never wanted to lose and never wanted to be proved wrong. I think my feel of later in life having to battle that was kind of like, oh yeah thats coz of war, thats coz of shell shock and shit.”

Throughout his 20’s ELMNT decided to travel and DJ. As a DJ he had opportunities to set up shop in all kinds of places. When he met Sophie he was living here in the UK for around 3 years whilst still travelling back and forth to France, Italy & Serbia wanting to reconnect with his roots.

So the most original question came next;

How did you get the name ELMNT?

“ELMNT, way back in the day, I know it’s one of them names like why did I name myself a skateboard?

I was young and I was part of a Hip Hop crew back in the day and I think I’m the last remaining one. I used to go as Prophet way back in the day but I think that when I free styled and battled people were always like he’s in the zone, he’s in the element, no matter where I was, I was a battle mc in the beginning and I manage to use everything around me. They say that I use all the elements like sorcery when I battle. No matter what’s around me or what you’re wearing I could pull it together.”

Talking about his musical influences, he cites his parents and J Dilla as impressionable influences. ranging from Prince & James Brown to Biggie and Tupac – embodying revolutionary rap and really being a poet, there was something going on with these artists in their heads that wanted something to change, his influences have been and remain, stylistic and conscious.

“I really respect emcees that didn’t have to compromise their message but did it with a certain flair. I love Timbo, Love Missy, loved that whole movement with Aaliyah, that was crazy, that sound they had was different and even though it was commercial no one cared because it was sooo good! They hold a great part of my heart for real

I started Hip – Hop super early in my life, I started writing at age 12/13 and producing 14/15. I don’t think I’ve missed more than a day. Ever. Its my second skin, like, when theres rain outside, I still got Hip-Hop, I still got that culture behind my back too.

I can go London, its cute, I can go have a coffee and do some hipster bullshit, or I can just catch up with the people that because of music I’ve met, like Sophie and yourself. You can tap into that culture again, anywhere, you age with it, the culture is there for you, Hip-Hop is there for it’s people for real.”

ELMNT adds the silver lining “At least if you get a direct hit and the bird shit, thats the ultimate luck!”

Sammi – “I feel like these pigeons have the attitude of a Londoner except they have much more influence because there’s always a 50/50 chance you’re gonna get shitted on.” 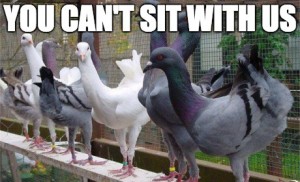 Follow ELMNT here. and be sure to check out some of his tracks here;