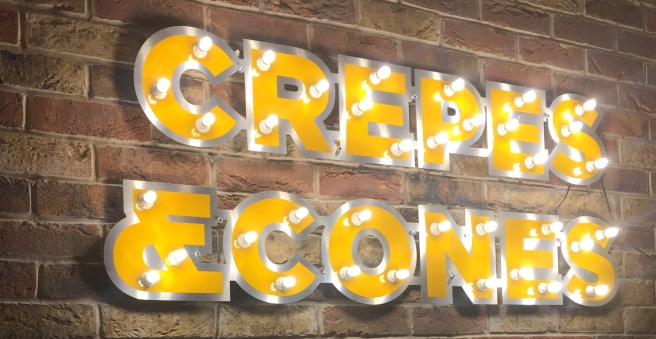 I’ve been sitting on this one since the day I visited Crepes and Cones with my business partner and family Dom and his girlfriend Ste.

It was their anniversary ❤ so we decided to go and give it a go, making the long car journey from North to Deep South.

We got there and despite rumours of long queues and not being able to get a table, we were pleasantly surprised we got in straight away 🙂 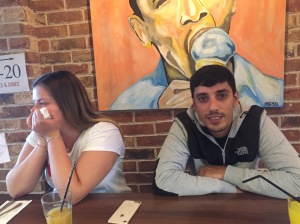 Before I continue with my review, I would just like to state that I support Krept, Konan and J2K in their music and business ventures so lets pray I don’t get barred from Ally Pally for this one…

I have supported Krept and Konan since I heard Otis and Paranormal Activity. I was at their first 2 Young Kingz Islington 02 academy shows where they had Yana Toma and MO as a supporting act, and majority of their London feature performances!
(paid for every ticket also…)

We were seated on the table with stalls near the kitchen area, food smelled good and the chef was getting busy mate.

Looking through the menu I noticed that a lot of the food recommended by our waitress included ‘Delroys Island Sauce.’

I LOVE SAUCE, I AM A SAUCY PERSON!!! Anyone thats eaten with me will tell you that.

But I hadn’t tasted ‘Delroys Island Sauce’ so me and Ste were trying to find out what kind of sauce it is, baring in mind all of the recommended food on the menu states it has the sauce on its food.

‘I wanna get a burger but I dunno about the sauce, if I don’t like it, thats it, burger done, I’m not eating.’

I said ‘OK. I hear you, you have to make money but this is a sauce I’ve never had in my life, I’d like to try before I buy you get me?’

Then she goes and asks the chef if I’m allowed to try it and he said ‘No, its 1 pound.’

Im sitting there thinking damn, these people really want me to just spend, do they even care if I enjoy my food, I mean i’m only asking to try the sauce… I don’t like to cause a dramatic scene and contrary to popular belief, the customer isn’t always right so I didn’t pipe up,  but I couldn’t help but think if Gordon Ramsay witnessed this he would be fuming. (Ramsey fans, am I right or wrong?)

I didn’t pay the pound for the sauce, just decided to allow it and hope for the best with my burger.

In the meantime, me and Ste went toilet, they had some sick posters with quotes and a big Crepes and Cones IN LIGHTS.

Our food came, I ordered the Crepe And Cone Burger

with plain fries on the side.

I didn’t like the sauce or the burger and the fries tasted like the cheapest bag of frozen chips you could find in Iceland. I was quite disappointed with my meal really.

Dom however, ordered a side of Mac n Cheese Sticks and Honey Hennessy Prawns which were BANGING!!! We really enjoyed the prawns so he ordered more. When I say BANGING, I mean BANGING. 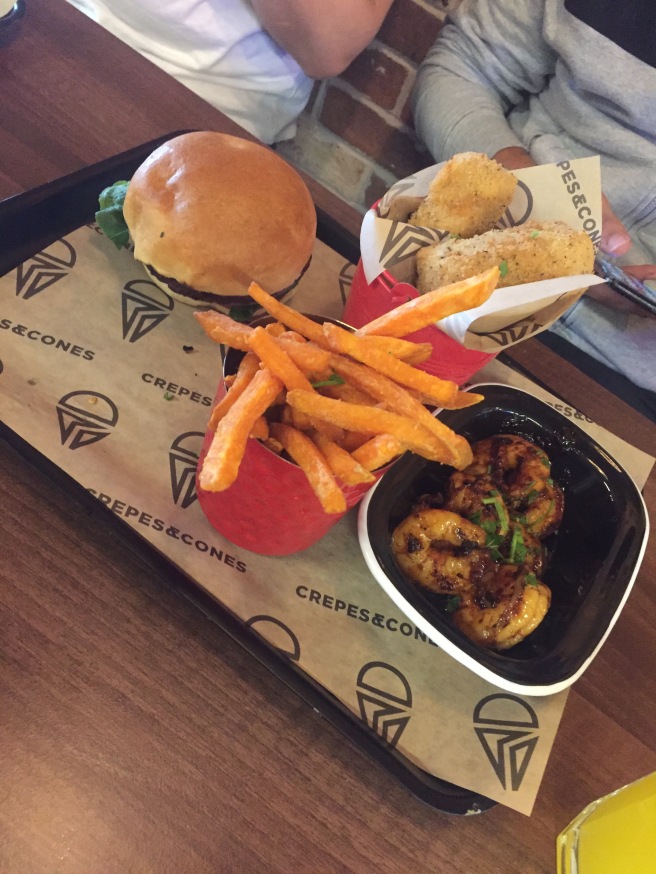 We all finished with our food, Dom got the crumble and I ordered the ‘Holy Crepe’ for dessert, which has fresh strawberries & Nutella with white chocolate and raspberry shavings and it tasted like HEAVENNNNN.

(Now I get why its called the ‘Holy Crepe’ lol.) 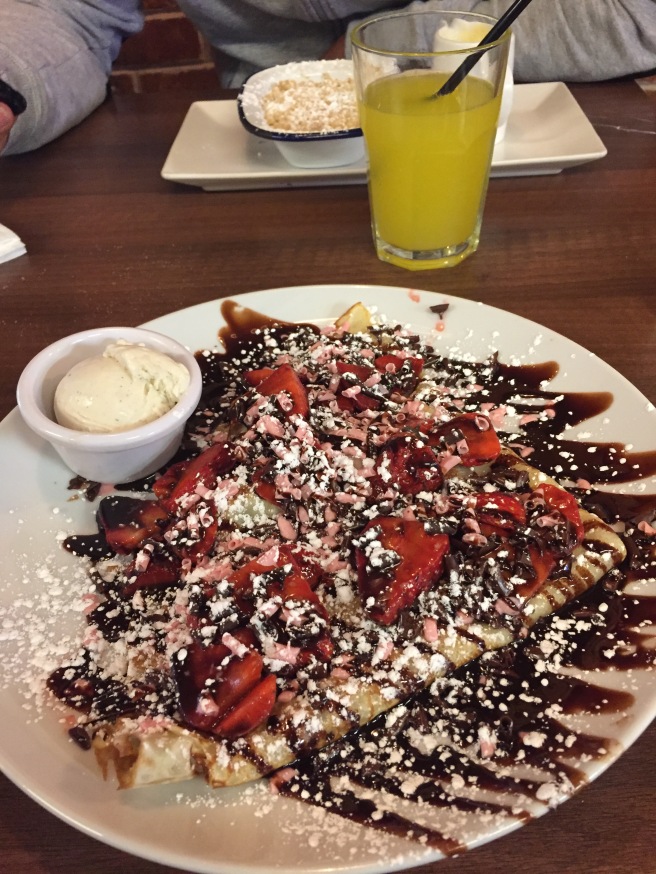 Ste wanted to order a milkshake but the waitress said sorry you have to wait half an hour for a milkshake, so Ste left it.

22’s now 10 minutes later the same waitress starts handing out milkshakes to another table across the room. Confused.com

I don’t like to put people in a bad light, I always try to write about things in an encouraging and empowering way but I felt a bit confused about my trip to Crepes and Cones, and really didn’t know how to go about writing this review so I stuck to my guns and decided honesty is the best policy and to be brave.

In future, (if they allow me after this) I would go back for the Honey Hennessy Prawns and the Holy Crepe ❤