The guys at NU:GEN happily agreed for another visit, this time I brang my very best friend and active blogger Mollie with me. Mols studying Fashion Comms and wanted to get some info about NU:GEN, how they started, their achievements and whats next.

So we got there at 9.30pm on a Sunday, Watford had beaten Arsenal that day (BOOOO! Im a gunner obviously…) But Lorie is a Watford fan so he was in high spirits, the studio had a real good vibe, people were finishing up in the photography studio and artists were arriving to record.

We sat down, had a drink and an informal/friendly chat. Lorie was our main focus for the evening and we had such an engaging conversation, he told us how his dream started (all from a cereal packet), he spoke to us about the hardships he had faced getting to where he is today and also let us in on a few secrets of whats in store for NU:GEN next.

Danny and Connor were about doing there own thing, they introduced us to a guy called Jamie who usually works there doing the photography and filming, he was really cool and took some proper sick photos, turns out we all had some mutual friends in common and then before you know it everyone was on a first name basis, networking and seeing where we could all help each other out. The creative vibes were flowing, friends and acquaintances were made, it was another successful and enjoyable visit. 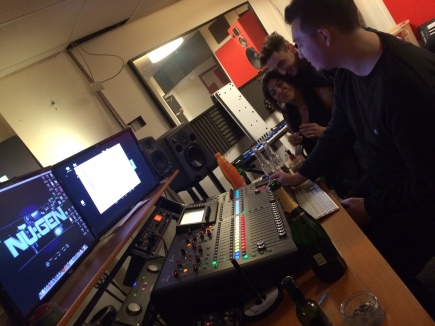 Swipe to ‘See Sheer’ 👄 @maccosmetics
It’s a London thing 😜 have had such a LIT time at @londontheplugs events with my girl @srjmusicinmotion 🔥
My 5 classic essential summer tracks that get my day on its way: Sammi G style 💞
I took advice from @drpimplepopper and used a few tools, it went alright. Extremely embarrassing for me to share spotty photos of myself but hey I keep it real… My full guide to dealing with spots the dr pimple popper way is on my website sammiswinton.com !!
Swipe for AUDACITY 😂
Just my average Saturday night. Thanks to everyone that joined me on insta live after getting lockarfff for music 5 times. Recently put on a lot of weight and felt shit after my jeans ripped and my thigh popped out so instead of continuing to feel bad about myself I’m embracing my body for what it is right now as it is still my home regardless of what shape size or colour it is. ♥️